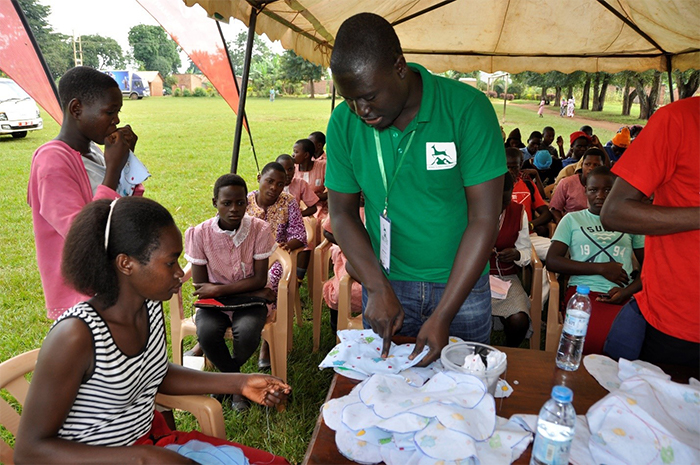 It’s a Saturday morning at Kasambira Primary school in Kamuli District; pupils are in groups; seemingly discussing academic related issues. A closer look proves me wrong! “We are learning how to make re-usable sanitary pads” says Geoffrey who seemingly read my inquisitive face. Whereas society in Uganda considers menstrual issues to be a preserve for females, Geoffrey a 14 year pupil of Kasambira Primary school who was actively participating in the making of re-usable pads says, he picked interest in making pads to save fellow pupils who are often trapped in the mix of menstruation “Girls suffer a lot during menstrual” he says as he reaches out for another piece of cloth to make his third pad of the day. In narrating how he leant about pad making he noted that had it not to be for the health camp which was organized by Hinds feet Project, he could not have come across a skill he said will go a long way in saving the girl child from the embarrassments that strike when (sometimes) least expect “There was a girl in our class whose cloth was stained with blood, instead of helping her, people started pointing fingers and laughing at her” he recalls. This, he says was an embarrassment to an innocent girl.

Geoffrey says, boys feared to come but he managed to mobilize four who he said were making pads comfortably.

To promote Geoffrey’s desire, the deputy head teacher of Kasambira Primary school, considered forming a menstrual management club which he says will help pupils to embrace the project of making reusable sanitary pads so as to keep the rural girl in school. “When Hinds feet came to my school asking for permission, I thought it was the usual health camp comprising of blood donation, HIV testing and counseling I was proved wrong when i saw a children’s clinic and a youth tent where making of pads was done” said the deputy head teacher. The deputy head teacher says, Hinds Feet project training was a window of opportunity for the school to form a new health project.

2 thoughts on “A case of gender and menstrual health”

Make a small contribution in improving health information in communities

Community Health and the Incarcerated